So I crossposted my previous post to LiveJournal, but I don't think I included any identifying information to help anyone who knows me there know me here as well. You'd think I'd be good at using software, but this isn't always the case.

This one should have the footer thingy on it.

All the cool kids have shifted away from LiveJournal. I really only kept that account around to keep up with all the folks on my list. I expect I'll keep it around still and maintain the high energy pace of posting I had there. That is to say, once or twice a year.

So, been a while since I've had much of anything to say. Occasionally I do and this is one of those times.

I was watching Gallipoli last night and started thinking about the scale of the senseless carnage of the First World War. I poked around a bit because I have this internet thingy and it can answer questions assuming I ask the right ones. I suppose it answers questions even when I ask the wrong ones, but not correctly. Anyway, there were about 10,000,000 military deaths in combat during the Great War. Like most people, I have problems conceiving that as anything other than a number. I need to turn it into something I can imagine to make it real. Something like, "If I were to take the equivalent of all the toilet paper I would expect to use during my entire life and instead wrapped the earth around the equator with it, how many times would I make it around?" This doesn't take the toilet paper used to do that into account, since that regresses infinitely. But of course, you have to make some simplifying assumptions to do that. I'm not planning to answer the toilet paper question now, but it does intrigue me.

So, what do you do with that many dead bodies to make it visualizable? You could lay them end to end, you could fill a very large hole, or you could stack them in some way. Laying them end to end doesn't seem very interesting, nor does stacking them one on top of the other. The Grand Canyon is a very large hole that many people can visualize, but the volume of the Grand Canyon is 4.17 trillion cubic meters according to the National Park Service. So you could put them all into the Grand Canyon and other than being extremely gruesome, it wouldn't even begin to fill it. Not a great visualization though. The Great Pyramid in Giza according to some site I looked at, now forgotten except by my search history, says the volume of the Great Pyramid is 2.6 million cubic meters. This seems to be a better way to think about massive numbers of dead soldiers.

Now we encounter the problem I'm not entirely sure about. How big is a dead body? We'll factor out that people in 1918 were generally smaller than we are today and deal with the average person as well, the average. According to Wolfram Alpha, the volume of the average human being is 66.4 liters or .0664 cubic meters. That's about two thirds, so .2 cubic meters is about 3 dead bodies or 15 for a cubic meter. This runs contrary to my intuition on this which was, I could wedge maybe two or three dead people into a cubic meter of space. I think the figure of 15 would require me to make the dead people into a liquid of some sort, but that would mean that I was packing the volume optimally. Optimally since there's no way to pack a liquid so that it doesn't conform to the space you put it in. Unlike dead bodies, which one assumes would be more gappy. Clearly, I need a better figure for the volume occupied by a non-liquified human being. Hopefully someone reading this will have a better idea how to arrive at such a thing.

So, the number of Great pyramids formed by 10,000,000 dead people, packed optimally is:

or one fourth of a Great Pyramid. Which isn't as impressive as I thought it should be.

Just a quick note to let people know that I was not involved in any way in this morning's mass shooting downtown. Busier than a match box at an arsonist's convention, though.

Oh and the battery died on my car on the way home.

ambitious_wench is out in California, which has been spending a lot of time lately being on fire. If you want to keep track of where the fires are and whatnot, Wundermap for Yosemite, CA I think she's in Yosemite Village, which isn't too close to the fire itself. For the official report, CAL FIRE and look for the link to The Telegraph Fire. I'd include a more direct link but the site is all php and I'm not sure it would link to the right place. 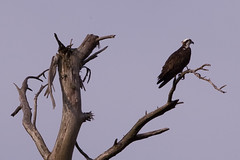 Osprey
Originally uploaded by Hermeneutic Sloth
I did take pictures of fireworks, but I haven't pulled them off the card yet. More of those when I get around to it.

I'm pretty sure this is an osprey, but I couldn't get any closer to it before it spooked. 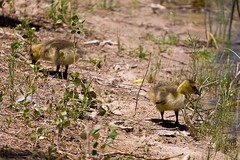 Canada Goslings
Originally uploaded by Hermeneutic Sloth
Drove around Albuquerque this morning, looking for a Walgreens and something to eat. After a bit I realized I was getting close to the Rio Grande and remembered seeing a park or something on the map. I found it and walked along the river for a while, probably should have gotten some sunscreen at Walgreens since I seem to be a bit redder than I like.

Anyway, while I was wandering around I saw several canada geese with their goslings. So naturally, I took pictures.

I've arrived safely in Albuquerque for those of you keeping track of my whereabouts
. Wireless isn't working at the hotel today, but should be back tomorrow afternoon sometime. In the meanwhile, I found a place where I can get something to eat and borrow a connection long enough to post an update. 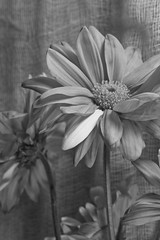 Black and White experiment 2
Originally uploaded by Hermeneutic Sloth
There's a blog I read called On Taking Pictures and he showed some interesting black and white shots. So I decided to try to replicate them.

A couple things about this shot. The lighting is all artificial and it was shot from directly above using my makeshift copystand. Stretched cheesecloth diffusers over the keylight but nothing on the fill. Shot as RAW then switched into greyscale in lightroom and then played with sliders. The f/8 version seems to be better overall than the f/2.8

I'm mostly a desktop user, but I have an old salvaged laptop I use for travel. I named it emeth after the word you're supposed to carve into the forehead of a golem. I've gotten a fair amount of use out of it, especially after I got a PCMCIA wireless card for it. Until this weekend it was running Ubuntu 7.10 and reasonably happy about it. No Linux experience ever seems completely perfect, which is what keeps you adjusting the configuration on it, but I knew what didn't work right and had workarounds for it. Until this weekend.

This weekend, I upgraded it to Ubuntu 8.04. It seemed to go pretty well, until I tried getting the wireless working again. The card uses a Broadcom chipset which has never been particularly well supported under Linux, but it's been functional at reduced speed the last couple years. Hardy Heron (Ubuntu 8.04) changes the chipset kernel mode driver from the bcm43xx module to a new b43 module, so I went and pulled everything down for it and got the right firmware loaded and slipped the card into the slot. It didn't go all the way in and didn't feel like it seated. Which would explain why the little power LED didn't come on. So I tried the other card slot. It felt a bit better seated, but still no lights. So I got out my tiny flashlight and started deeply into the bowels of the cardslot. wedged in amongst the tiny pins about 3 inches into the guts of my laptop were silica gel pellets. I managed to get those out, but I have bent pins and still can't seat the cards. I'm going to hit the electronics surplus place later in the week to see if they have anything I can use to straighten the pins, but I don't have a lot of hope.

I tried dismantling the laptop to get closer access to the pins than through the slot, but there seems to be a case screw or two I couldn't find and forcing open the case on delicate electronics is never a good idea. If any of you have any experience with pin straightening, do let me know any strategies that might be helpful.
Collapse